This post details how to connect from Linux to the IDWedgeKB when it’s setup as a serial device and is targeted at developers who which to communicate directly with the IDwedgeKB via the USB Serial port on Linux computers.

Most clients will use the USB keyboard interface which is plug and play on Linux, Windows and Apple operating systems.

Start a terminal window on linux and

type—  lsusb – which lists the USB devices.  The screenshots shown in this post are for a Raspberry Pi. 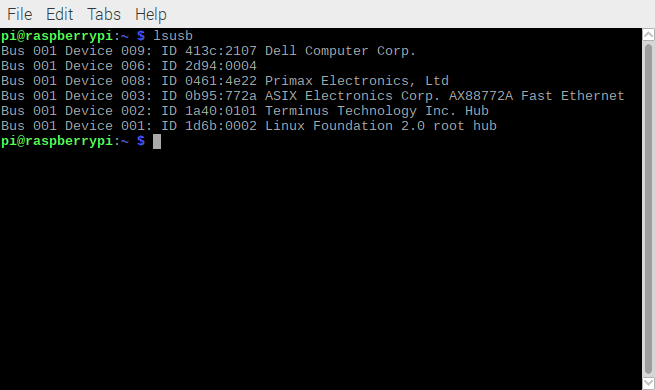 The device 2d94:0004 is the CDC USB Serial driver of the IDWedgeKB. 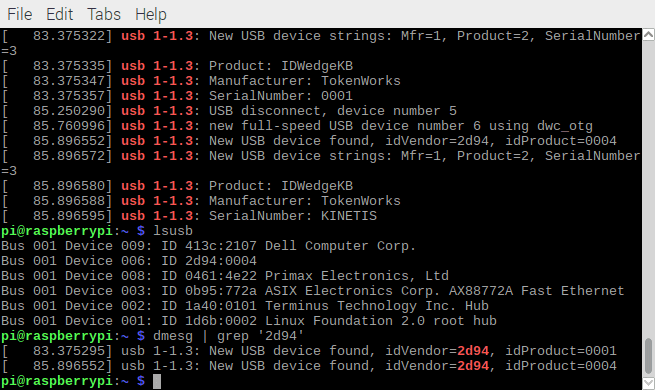 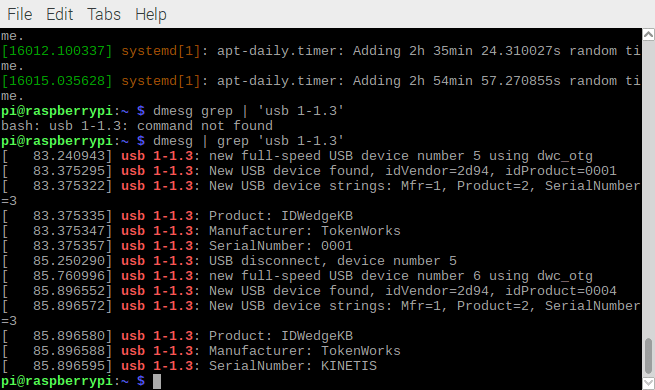 This displays all the information known to linux based on the IDwedgeKB based on its USB descriptors.

The IDwedgeKB is recognized as a ttyACM0 device.  To find all the TTY devices recognized by LINUX,

type —  dmesg |grep ‘tty‘ to list all the tty devices There are a few TTY devices, The USB ACM device ttyACM0 is the IDWedgeKB. Note: The baud rate has been changed on the Raspberry Pi to 115200

Next – run the screen application to open a serial emulator and interface with the IDWedgeKB.

If the screen app is not installed on the computer – type — sudo apt-get install screen – note: an internet connection is required A new terminal screen will open.

Hit the enter key a couple of times, you should see ?? which is IDwedgeKB’s response to an unrecognized command.

Scan a drivers license in IDWedgeKB – it will output a comma delimited string of fields to the serial port which is displayed below. Other IDWedgeKB serial commands are

rawdata – this displays the raw data from the last scan

This concludes the post.  Hopefully it helps developers who which to communicate directly with the IDwedgeKB via the USB Serial port on Linux computers

Note: This has been tested on a Dell C610 laptop running Ubuntu and a Raspberry Pi Zero W running RASPBIAN STRETCH WITH DESKTOP Version:August 2017