Here is a why we say catching Fake IDs is not the main reason to purchase an ID Scanner.  So many manufacturers market ID Scanners as ‘stopping fake IDs’ but as shown in the recent article, an ID Scanner will not be able to detect the most common form of fake IDs.

According to a study of University of Missouri researchers, the most common approach to get a Fake ID is to use a Valid duplicate ID.   A friend or sibling goes to the department of motor vehicles, claims they lost their ID and then provides it to a minor.   This approach relies on facial similarities and small size of pictures on IDs.

So NO ID Scanner is the world is going to stop this type of fraud, yet any ID Scanner with memory will help a merchant prove that an ID was check and therefore allow an Affirmative Defense Claim.  Merchants with an ID Scanner are able to prove to law enforcement that an older sibling’s ID was checked when the younger sibling claims their underage ID was presented. 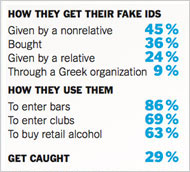 Source: “Methods of ‘Fake I.D.’ Obtainment and Use in Under-Age College Students.” Numbers add up to more than 100 percent because of multiple answers.

USING Adobe Photoshop, under-age drinkers can probably make an ID convincing enough to buy beer from an overworked gas station clerk. Or they can take a chance with an online novelty-card site. Yet the most popular way of pretending to be 21 remains decidedly low tech: using identification that belongs to older friends or siblings. In a study of some 1,100 under-age students by University of Missouri researchers, published this month in the journal Addictive Behaviors, 69 percent with fake IDs said friends or relatives had given them one.

Dennis Deters, a lawyer who defends Miami University of Ohio students facing fake-ID charges, explains how it works: “You can just go into the bureau of motor vehicles and say, ‘I lost my license,’ and then you give it to your buddy. You have a real ID opposed to something fabricated.” That’s useful because of harder-to-counterfeit features like raised lettering, microprinting and ghost images.

If a bar has an ID scanner, you can still get in with a borrowed card.

“If I’m a blonde female, 5-foot-4, with blue eyes, it’s easy enough to change my hair and makeup to look like my friend so that the guy at the door is not going to notice,” says David Huff, special agent with the Virginia Department of Alcoholic Beverage Control.

But if a bouncer turns you in, it’s more than a hassle. First-time offenders can face fines of a few hundred dollars, community service and driver’s license suspension; the crime may end up on your record permanently. If caught on the University of Georgia campus, you will be named on an arrest log that pops up with a Google search. And in many states, making even one card is a felony.

Funnily, the chances that a borrowed ID will backfire increase as you drink. Tyrone Parham, deputy chief of the Penn State police, says he recently checked an intoxicated undergrad’s card. It was real. The guy looked like his photo. But then, “he told me his name.” It was not the one on the card.