Spring is a season of new beginnings, and that holds true especially for the Illinois Secretary of State’s office this year. The organization recently introduced a new process for obtaining driver’s licenses and identification (ID) cards, as well as an updated design for the documents. The changes to both the process and the design were made to better comply with the federal REAL ID law and to deter illegal replication and identity theft, and will roll out across the state though May, June, and July 2016.

Under the process of central issuance, people applying for driver’s licenses and ID cards will have their pertinent information immediately sent to a highly secure centralized facility in Springfield where facial recognition software will be used to help confirm identity. Permanent licenses and ID cards will be printed and mailed via the USPS from the central facility to the applicant’s address on file within 15 business days. In the meantime, the applicant will receive a temporary paper document that contains identification information and a photo. The temporary document is valid for 45 days. The applicant’s old license or ID card will also be hole punched and returned.

The paper temporary document applicants will receive while they wait for the centrally issued card to arrive in the mail.

Illinois Secretary of State Jesse White said, “The upgraded driver’s license and ID card contain a variety of enhanced security features that take advantage of new developments in technology.” Some of those features include: 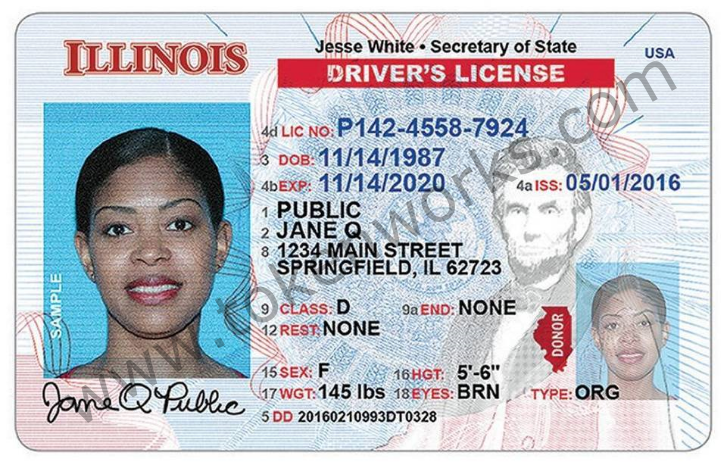 No Illinois citizen needs to obtain a new license or ID card until his current card expires, and the fee for the newly designed cards will remain the same ($30 for a Driver License, valid for four years; $20 for an Identification Card, valid for five years). State officials expect all driver’s licenses and ID cards will be replaced with the new versions within four years, as citizens cycle through the renewal process, and the cost is roughly $6 million.